The Mineral Point Pool was originally built in 1936 during the Work Projects Administration (WPA) days. The WPA was established on May 6 1935 and ended on June 30, 1943. The goal of this program was to end, or at least, alleviate the effects of the “great depression”. At its peak in 1938, it provided paid jobs for three million unemployed men and women. The WPA was a national program that operated its own projects in cooperation with state and local governments.  The WPA built traditional infrastructures such as roads, bridges, schools, libraries, courthouses, hospitals, sidewalks, waterworks, and post-offices, but also constructed museums, swimming pools, parks, community centers, playgrounds, coliseums, fairgrounds, tennis courts, zoos, auditoriums, waterfronts, city halls, gyms, and university unions. Most of these are still in use today. A total of 805 pools were built nation wide and the Mineral Point Pool was one of them. A stone with the letters WPA and the date 1936 sits above the archway as you enter the pool area from the bathhouse.  Stones from nearby deteriorating stone cottages were used to erect the bathhouse, pump house and walls. These stones came from the historical site now known as Pendarvis. 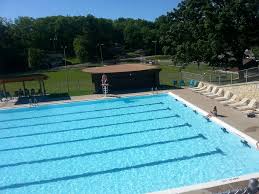 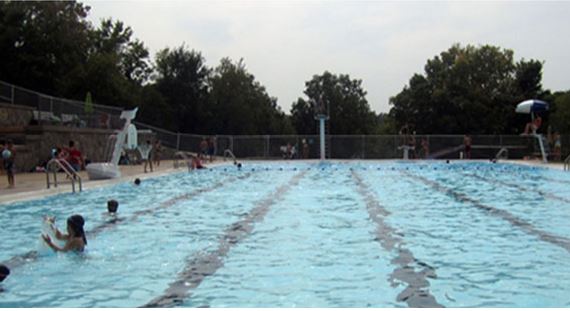 Because the original pool shell had gotten to the point of no return, a new pool was rebuilt in 1987. The new pool was basically put inside the old one. At this time, updates were made to the bathhouse.  A new pump house was erected. The old pump house still remains and is now  used for storage.  The new pool is roughly 150 feet long by 50 feet wide and holds 338,000 thousand gallons of water. The depth of the pool starts at 3 feet, with stair entry, and goes to 5 feet deep where a rope is in place. This distance is close to 100 feet long. On the other side of the rope is the well section of the pool, which is 10 ½ feet deep.  There are 2 diving boards in the well.  The high dive is approximately 10 feet from the water and low dive is 3 feet. On the deck sits 3 lifeguards chairs and a shelter that provides shade. The pool provides chairs and lounges. Treats and beverages can be purchased at the checkroom.